The following article by Jessi Rita Hoffman was originally published as a guest-post on Jane Friedman’s blog at www.janefriedman.com. Friedman is the former publisher of Writer’s Digest.

One of the hardest scenes to successfully write is the love scene. In your mind you may picture a moving, romantic interlude, but down on paper, you find it reads like melodrama—or worse. This can spell disaster for your novel, particularly if the entire book is building to this scene and it needs to be stupendous to carry the story.

In my work as a book editor and writing coach, I see a lot of limping love scenes. Some of the problems are those of amateur fiction writing in general: too many clutter words, repetition of details, and inconsistent spatial narration (one minute he’s holding her hand and the next minute he takes her hand, for example).

Clichés are another problem, and they really stand out in a love scene. Lines like “kisses away the tears, tasting their salt,” or “she was surprised by the sweetness of his kiss,” or “I think about you day and night” can spoil a tender moment with their staleness.

Chauvinism is another common problem—along with what I call “slutification.” Lines like “there was still so much about her that was pure and innocent” may offend women readers, as will oversexed descriptions of the heroine.

But the greatest flaw I commonly see in love scenes written by aspiring novelists is the flaw of excess. For a love scene to move readers, it must embody the principle of restraint—in dialogue, in description, and in the characters’ actions.

A Lesson from the Victorians

Ever wonder why Victorian novels are so popular? We live in an age of hook-ups and friends with benefits, where romance and sex are about as complicated as kicking off your shoes. The Victorians, by contrast, lived in an age of restraint, where considerable flirtation, intrigue, wooing, and resistance were part of the mating ritual. There was tension and intensity in old-fashioned courtship, and that is the stuff of which great fiction is made. 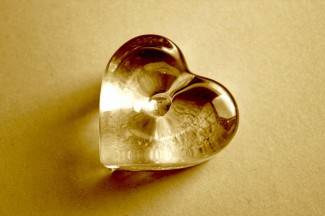 Your writing teacher called that tension “conflict.” Interesting fiction is built on conflict. Unless a scene has tension, it dies on the vine. It puts us to sleep. But a scene that has two forces pulling in opposite directions mesmerizes us. We don’t know what’s going to happen, or who is going to win. The tension is taut like a fisherman’s line with a forty-pounder tugging on the end. In a love scene, this translates to tension between boy and girl, between felt love and forbidden or impossible expression, between what the characters want and what they can have. Restraint and tension are the name of the game. Make it too easy for your characters, and your love scene will hold as much power as a deflated balloon.

One of the best examples I know of the power of restraint in a love story is Emma Thompson’s film version of Jane Austin’s classic Sense and Sensibility. Eleanor and Edward are so determined to do the right thing in spite of the cost to themselves personally …  READ MORE