This article by Jessi Rita Hoffman was first published on Jane Friedman’s blog at www.JaneFriedman.com. Ms. Friedman is the former publisher of Writer’s Digest.

Are you struggling with the task of writing children’s dialog? Some of the worst dialog ever written, in both film and fiction, has been dialog for kids. We all know children are not just miniature grownups—they don’t think like adults or talk like adults. Yet writers seem to forget that when they go to write a story and place words in the mouths of child characters that real kids never would say.

Here is one example, from a novel I’m editing for a first-time author. For the most part, this client’s dialog writing is spot-on—it sounds like real people talking—but when he has Matthew, the two-year-old, speak, we find the kid spouting sentences like this one: “So we’re moving today?” A two-year-old, mind you!

Not only do tots of this age not possess enough life experience to understand the meaning of “moving today,” but their level of speech development is not advanced enough to construct such a sentence. A more realistic way of showing a two-year-old’s confusion on moving day would be to have him crying over something small that normally would not upset him, or showing aggression toward the baby, whom on most days he loves. If words are even needed here, “Me not go” or “Matthew stay home” would be far more realistic than the adult words the author has stuck in this little boy’s mouth. 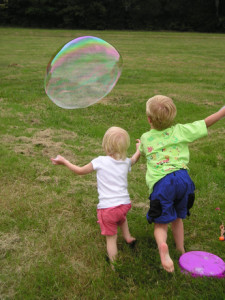 Very young children have a limited vocabulary. They are also developmentally incapable of grasping abstract concepts, speaking in abstractions, or constructing complex sentences, according to psychologists. They speak in simple sentences or small sentence fragments. They typically do not know the “correct,” abstract word for a concept (such as “moving”) and instead use a substitute, concrete word that they do understand (such as “go”). And don’t forget that when authors write dialog for characters of any age, accuracy doesn’t mean writing grammatically—it means writing the words the way the character would actually say them, whether that’s grammatical or not.

Let’s look at another example of unrealistic children’s dialog from a different beginning author, who writes the following about a six-year-old:

“Daddy, can you make me some lunch?” Anna called from the hammock. She lazily threw her arm over her face in hopes of shielding out some of the heat.

These words sound far too “adult” for a six-year-old. Moreover, a child of that age doesn’t have the developmental capacity to intellectually plan out that putting her arm over her face might make her feel cooler. She would put her arm in front of her face instinctively, not consciously. (In hopes of shielding out some of the heat implies cognitive or conscious intent).

Here is how I would rewrite that paragraph:

“Daddy, I’m hungry.” The sun shone down, and it felt hot. She covered her face with her arms.

Let’s look at one last example from the same manuscript. This time the six-year-old is telling a friend about her mother abandoning the family. She  states:

“I heard Daddy talking, and he said it was just a matter of time before this happened. He said Mama couldn’t get away fast enough. She was just looking for the right time.”

But a six-year-old would never say that. Look at the complex sentence construction of the first sentence. And observe the conceptual complexities of “just a matter of time” and “looking for the right time.” A twelve-year-old might say this, not a little girl.

To understand what kids are capable of thinking and saying at different ages, familiarize yourself with the four stages of cognitive development described by renowned child psychologist Jean Piaget. And if you’re writing a story with a child character, take time to really listen to how kids of that age talk. Make listening part of your research, and be as diligent about that as you are about researching any factual material you will include in your story.

Writing children’s dialog does not have to be the downfall of your novel. The lines you pen will reflect reality if you let real children be your guide.