The following article by Jessi Rita Hoffman was originally published in Writer’s Digest.

Scene time and place: A Civil War combat zone, just after a skirmish. Soldiers limp away from the conflict, weary and depleted. One falls to the ground, too weak to make it back to camp. The ground is littered with bodies of the wounded and dead. Far in the background, a white SUV speeds across the battlefield.

Whoops! It’s a goof in a Hollywood production, and we congratulate ourselves on catching it. We all get a laugh out of bloopers we find in the movies, but when they show up in a novel we’ve written, they aren’t quite so funny. There’s no better way to lose the respect of readers (or of a prospective agent) than to pollute your story with eye-rolling inconsistencies.

Yet this is a common mistake for aspiring fiction authors. I call such bloopers reality violations—inconsistencies of time, place, sequence, physics, or world-building—and they can maim your novel before it gets out of the starting gate. 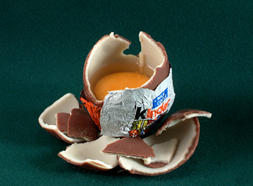 A reality violation occurs when something you’ve written is at odds with the way the world works—either the actual physical world (if you write realism), or the imaginary world (if you do world-building, as in sci-fi or fantasy). A reality violation is a blooper, or something that doesn’t make sense in terms of your story or scene’s physical reality.

Here are some real-life examples from books I’ve edited for clients:

Example 1: We’re told today is Thursday and the wedding will take place Saturday. The author goes on to narrate events that occur today, the next day, and the next—all of them before the wedding day.

But there’s only one day between Thursday and Saturday, not two. A calendar reality has been violated.

Example 2: A woman unlocks her front door, slams it shut, drops her purse on the sofa, and shuffles into the kitchen. She lays the mail on the table, sinks into a chair, and opens her purse.

But how can she open her purse in the kitchen, when she left her purse on the sofa? The author forgot the sequence of actions she established. A careful reread would have revealed the discrepancy.

Example 3: Maggie asked for a salad, and Jack ordered the steak. Then they continued their argument. Jack couldn’t understand why Maggie was being so unreasonable. It wasn’t like her to get this worked up. The waitress returned after what seemed like hours. “Be careful. Those plates are hot,” she said, placing the food on the table.

But Maggie ordered a salad, so her plate would not have been hot.

Example 4: Jack took off his soiled garments and tossed them on the floor, then filled the sink with warm, soapy water. He lathered a washcloth, and cleaned his face and armpits, at last feeling refreshed. He toweled himself dry. The cell phone rang, but Jack ignored it. He hurried to the kitchen, grabbed an energy bar from the cupboard, and rushed out the front door.

The author forgot to include the step where the man dressed himself. Unbeknownst to the writer, his character just left the house naked!

What if, instead, the author had written the following?

Jack stopped by the house to shower and grab an energy bar before hurrying to his court appointment.

In that case, it would not be necessary to tell us Jack got dressed, because the author is summarizing Jack’s actions, not giving us a blow-by-blow, sequential account. See the difference? If you’re narrating every move, you must narrate every move. But if you’re summarizing action, you can leave it to the reader to make the obvious assumptions.

See if you can catch the reality violation in this next example:

Example 5: Carl leaned against the fence post, watching Patrice ride her new horse into the corral. She tossed him a flirty glance.
“Good ride?” he asked.
“The best,” she said, patting Lightning’s neck. “He’s a winner.”
“Maybe tomorrow I’ll ride with you.”
“I’d like that,” she said, tossing her hair over her shoulder.
Carl grinned, leaned down, and kissed her.

But he can’t lean down and kiss her if he’s on the ground and she’s on the horse—Carl would have to be fifteen feet tall. The writer forgot to get the girl off the horse and get Carl over to the girl. Essential actions were forgotten in the sequence.

I said these are real-life examples from books I’ve edited, but in this horse example, I omitted a paragraph where Carl and Patrice chat a while before he kisses her. The author missed the blooper because, by the time he got around to writing about the kiss, he forgot he still had the girl sitting on top of the horse. Reality violations are harder for writers to catch when the actions are spread out across more paragraphs, with more dialog in between, because it’s easier to forget where your characters are standing or sitting and what you last had them doing.

Example 6: The road was always busy, but this morning was worse than usual, and it took Marisha longer than it should have to reach the library. She spent a couple of hours lost in genealogies, but couldn’t find the information she was wanting. Annoyed and frustrated, she gave up, called “goodnight” to the librarian, and left.

But if Marisha started out in the morning then spent two hours at the library, it would have been morning or early afternoon when she left, so she would not have called out, “Goodnight.”
Bloopers—reality violations—fall into the blind spot of the author who makes them, and most of us have this blind spot. But just as you can work around your automobile’s blind spot by checking your mirrors and looking over your shoulder for “invisible” passing vehicles, you can work around your writer’s blind spot by diligently checking for “invisible” inconsistencies when you do your revisions.

How to Detect a Reality Violation

To detect reality violations, one trick is to reread each scene after you write it, taking care to visualize it exactly as you worded it. If a character crosses the room, picture her crossing the room. If she drops her purse on the couch, picture her doing that as you read it. If you create a vivid mental image of exactly what you have written, most inconsistencies will pop out at you as clearly as that SUV on the Civil War battlefield.

Another trick that helps is creating a clock or calendar for the action of your novel. This works for catching time inconsistencies. Charting out the sequence of a string of events as you read through your draft will make any discrepancy in the time line show up immediately.

Making the effort to blooper-proof your novel will pay off in the reception it receives, whether you self-publish or hope to go the route of traditional publishing. Reality violations shout, “Amateur!” to anyone reading your story, so make sure to weed them out before exposing your precious manuscript to the world.