The following article by Jessi Rita Hoffman originally appeared as a guest post on www.JaneFriedman.com. (Jane Friedman is the former publisher of Writer’s Digest.)

Do you torture your metaphors, linking unlike things in outrageous comparisons? Do you manufacture odd phrases and invent “words” in an attempt to seem “literary” and “sound like a writer”? If so, you probably don’t even know you are doing this, yet the pretentious writing that results is one of the marks of an amateur writer. It’s also one of the most common flaws in the manuscripts aspiring authors send me to critique.

I understand where this naïve mistake comes from. I used to be guilty of it myself. In high school and college, I was a self-conscious writer, twisting and torquing normal English into bizarre shapes with every tortured term paper and short story I wrote. I thought I was sounding cool and impressing my teachers, but in truth I was trying to disguise my insecurity as a writer. And of course, it didn’t work. God pity the poor souls who had to read those papers! I hope they got a good laugh out of them, at least.

But to be fair, writing teachers bear part of the blame for all this overdone writing. They encourage students to indiscriminately indulge in metaphors and imagery. It’s not students’ fault if they interpret this to mean that the more metaphors and unusual word constructions they can stuff into a manuscript, the better it makes their writing. But they couldn’t be more deluded. 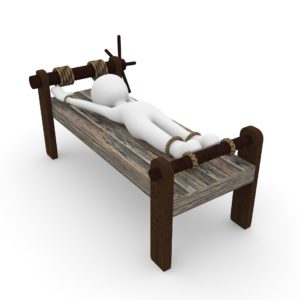 When you overwrite, flaying the language in an attempt to sound impressive, the opposite happens. You end up looking foolish. You broadcast in no uncertain terms that you are an amateur writer.

In this article, I’ll share some real-life examples of crazy things my clients have written in the mistaken belief that they were being literary. Beneath their awkward sentences, I’ll share the remarks I made in the margins. I’ll also share some beautifully done metaphors written by these authors once they learned to stop trying so hard and to write normal, natural-sounding English. I’ll include some examples of good metaphors from modern literary novels as well.

Example #1: They strolled around the schoolyard track like inmates in a prison yard.

My margin-note comment: Why “like inmates in a prison yard”? You have to be judicious with your metaphors, not just insert them randomly because some writing teacher told you that authors use lots of metaphors and you want to demonstrate your originality and creativity. A metaphor, to be judicious, needs to support the tone of the scene or the tone of the action it is describing. If you say they stroll as if they were prison inmates, that says there’s something about the schoolyard that makes them feel imprisoned, or something about these characters that makes them nefarious or guilty. Given the rest of the scene and the story so far, I’m sure that’s not the case. Rather, you just thought it would be cool to use a metaphor here, right? But it’s not cool, because the metaphor is inappropriate. It detracts from the scene rather than supporting it. It gives their casual strolling around the track the wrong flavor. Sometimes your metaphors are right on, sometimes they’re neutral in value, and sometimes they’re just plain bad, like this one. Be thoughtful and judicious in your use of metaphors! Like description in a novel, they can never exist for their own independent sake or to demonstrate the creativity of the writer. They must support the story. Unless they do, they are a detriment to the story.

Example #2: The sun had just gotten comfortable. Barbecue pits were smoking, and the green grass was littered by the feet of running children.

My margin-note comment: Here’s an example of being fancy (attempting to be “literary”) at the expense of the basic requirements of good writing. Just as you have to be careful not to write metaphors that convey the wrong tone for a scene, you have to be sensitive to the connotation of the words and images you use, and be careful not use ones where the connotation is inappropriate. The word “littered” has a connotation of destructiveness and negativity. Saying the running children “littered” the grass implies they are making the grass ugly or destroying it in some way. It’s an ugly image, when in fact the image of small kids running through grass should be a pleasing, refreshing image, unless you have some genuine reason for making the children’s running seem negative and destructive, and that is not the case here. You are attempting to create a pleasant scene, not a negative one, but you spoil the pleasant imaging by using a verb that has the opposite effect. Don’t get fancy at the expense of maintaining tone and appropriate connotation. The point is not to find the most original word, but to find original words that also suit the picture you are painting in a given scene.

Example #3: I await my turn for a CAT scan to determine if the cancer has spread to my lymph nodes. Tabs flee the blue and white hospital gown, intentionally evading my grasp, impervious to the twisting and grasping method I am employing in a vain attempt at alignment. While attending the truant tabs pirouetting the seams of the standard-issue gown, I am startled by a voice barking my name.

My margin-note comment: This is an example of forced metaphor/ forced personification—self-conscious “literariness.” An analogy is only acceptable if it matches the flavor of the scene. Pirouetting ballerinas? Truant students? Besides having nothing in common with the flavor of the serious situation you’re writing about, and really nothing in common with the ties on a hospital gown, they combine two unrelated images to form a mixed metaphor (always a no-no), and we end up with the gown ties being “truant ballerinas.” Can you hear how bizarre that sounds? This a common mistake of aspiring authors: torturing a metaphor just for the sake of having one. Unless a metaphor spontaneously suggests itself from your creative, subconscious mind, it’s probably forced and phony-sounding. If an author tortures metaphors badly enough, the writing can come across sounding downright psychotic. Scrub your story of tortured metaphors and tortured personifications. Never write a metaphor just for its own sake!

Example #4: I reply to the instructions emanating from the maw of the ponytailed technician.

My margin-note comment: Be sensitive to a word’s connotation. “Maw” (meaning mouth) has the connotation of “monstrous.” But the ponytailed technician isn’t someone you’re trying to paint as monstrous, so the term is not suited to what you are describing. Don’t use a “fancy” word, a “thesaurus word,” just to keep from using an “ordinary” word. Write simple, natural English, and your writing will fare much better!

Example #5: My belongings, seized in the belly of a metallic half-locker, are secured away by a horrendously oversized yellow key tag, now protruding glaringly from the open purse at my side. I place Michael Kors and his protruding yellow tongue upon the lap of a loitering chair.

My margin-note comment: The locker didn’t “seize” your belongings. You placed them there, so that just sounds weird. And how can a large key tag be “horrendously” oversized, as if it’s shockingly broken some rule? Michael Kors is a fashion designer, so you’re apparently saying your purse is Michael Kors and the key tag is his tongue. It’s a weird, far-fetched comparison. It’s as if you’ve somehow picked up the mistaken notion that the more outrageous a metaphor is, the more original and literary it will make you seem. But the opposite is the case. Off-the-wall comparisons shout “amateur” to agents and other sophisticated readers. And a “loitering chair”? Really? In what sense can a chair be said to be loitering? You’ve heard the term “overacting” used to describe self-conscious, amateur actors. They get onstage and posture and preen, delivering every line with pretentious exaggeration. They think this hides their insecurity and makes them seem confident and more “dramatic.” That’s the same thing amateur writers do who try to hide their lack of confidence with pretentious language. They twist the natural flow of words into something so arched and distorted the meaning is barely intelligible. The mistake of insecure actors, hiding behind their bluster, is termed “overacting.” The mistake of insecure writers, hiding behind their bluster, is termed “overwriting.” Everyone except the author herself can see right through the bluff. She is the only one who’s being fooled …

READ MORE … This article continues on the Jane Friedman website. Go to https://www.janefriedman.com/do-you-torture-your-metaphors-the-problem-of-self-conscious-writing/