Where I live, the libraries are closed as part of the Covid-19 lockdown. One of the books I was reading and “got stuck with” when the shutdown came was The Dearly Beloved, by first-time novelist Cara Wall. It’s quite a gem, so now I’m passing it around to friends while waiting to return it at the library reopening. I’m giving it a nod here on my blog as well, because we all can use some uplifting fiction right now, and this novel is nothing if not uplifting.

The genre is literary fiction. I would say Christian literary fiction, except it’s not that exactly. It doesn’t pitch or preach particular beliefs or philosophy. It depicts the lives of two Christian ministers, one of whom is married to an atheist. More than anything else it’s a love story–two love stories, actually–and the story of the friendship of four people, thrown together by life, whom no one would ever expect could become friends.

The story is unusual, original, and written in a style that took my breath away. There’s a quietness to the writing, a stillness through which the author peers out at life and notices the little things that most of us constantly miss. She shows them to us, and in so doing, brings our own minds to her level of insight and peace. 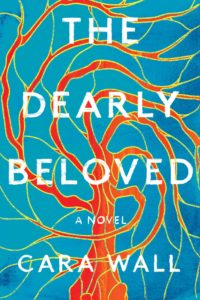 The book is a harmonization of opposites–personalities that clash, beliefs that never bend, burdens that never ease. The novel demonstrates the remarkable ability of people to adapt to the most impossible circumstances when love is the driver. There’s no sugar-coating. We get raw, real life here, but a golden light suffuses it.

That’s why it’s a wonderful story for our times, and a book I warmly recommend to my readers. To give you a taste of the loveliness you’ll find, here is an excerpt from the prologue:

On the day Charles Barrett died, James MacNalley closed the door to his study, sat down in his chair, and laid his head on the thick edge of his desk so he could weep. His wife, Nan, did not knock to be let in, though his rough, heavy sobs hit her like stones. She knew James’ own death would wring the same sounds from her, if he went first and left her adrift in the world, unmoored.

Nan knew, full well, that life was a series of bereavements, and that each one stole from her one load-bearing beam, one bone. Nan almost always believed, as her father had, that even deep wounds could be repaired, that God healed all parts of us, like skin: no matter how sharp the cut, it would someday knit itself back together and leave only a scar. The hallway in which she stood, for example, had once been blue with a dark wood floor, but there had been a flood. When the old boards warped, Nan replaced them with pretty, flowered tiles.

But this was not a wound; it was an amputation. There was no proxy for Charles. There was no replacement to be carted in like a sofa or hung, carefully as a picture, to hide the hole in the wall. James and Charles had ministered together for forty years. They had witnessed each other in pain, in desperation, in crises of faith, even as they struggled to inspire a congregation, to help them make sense of the course of events that engulfed the world. It was a lifetime, as long as the lifetime James had spent with her. And now, he had no one to tell him what he needed to know, which was: How did I come to love someone so much I cannot bear his passing?

The Dearly Beloved: an upbeat novel for troubled times. I hope you’ll enjoy it as much as I did.